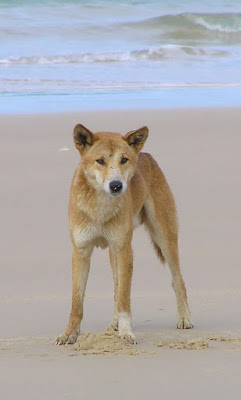 The recent incident on Fraser Island involving a young child being bitten on the bottom by a Dingo brought back memories of the much publicised event in 2001 when a nine year old boy died after he and his brother were attacked by two dingoes.

Certainly the incident was shocking and tragic but was it preventable?

Of course, after such incidents, there is a lot of media hype about so-called "vicious Dingoes" and calls for removal of the dingoes from the island; kneejerk, ignorant reactions that solve nothing.

There are several parallels in these two incidents. Visitors to the island continue to feed dingoes despite warning signs advising them not to. As has happened in many places worldwide wild animals lose their wariness of man in an endeavour to scavenge for food. In both cases the children appear to have been unsupervised.

Dingo behaviour is akin to normal dog behaviour only, in some cases, more acute. All too often we hear about children being attacked by domestic dogs in suburbia but the cry to destroy the entire breed involved does not go out.

It is the combination of people’s ignorance of dog behaviour combined with the stupidity and laziness of others who do not control their dogs that is the cause.

The dingo is an apex predator; it is not your fluffy, sooky canine that lives in your home. The lion and the tiger are cats but are not confused with the domestic moggy. They are respected and allowed to roam in the wild unmolested (with the exception of so-called “sports” hunters).

Why can’t people respect the dingo and leave it in peace to carry out its role in nature? Yes, dingoes have been domesticated and live in harmony but, with the right people, devoted to understanding their ways.

A blog I came across recently (http://worldofangus.com/blogs/health-training/92308481-the-five-most-dangerous-types-of-dogs-in-the-world) listed the five most dangerous dogs in the world. It is not a list of breeds as some might think but consequences of ignorance, stupidity and laziness.

Like dogs, dingoes can also suffer from fearfulness and illness, depending on their experience with humans.

Sadly, regardless of how many warnings abound, incidents with both dogs and dingoes mostly occur through ignorance, stupidity and sadly disregarding advice from people in the know.

Leave the dingoes in peace and they will do the same.
Posted by Random Jottings at 20:15