Three books on the Dingo by Berenice Walters. 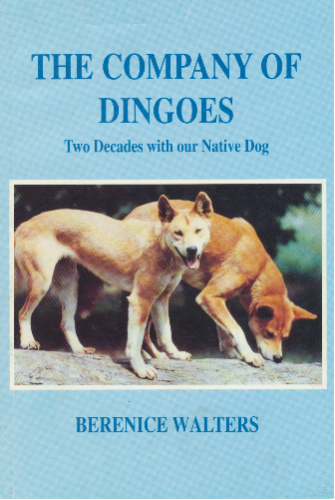 Berenice’s first book, published in 1980, was titled Dingo: Dog of Australia was. It was a simple little book but the first of its type; that is, a positive book about the dingo written in simple terms by a layperson.


Her second book, Dingo: Getting a Good Dog a Better Name, published in 1984 with a revised edition in 1990, was more in-depth and included a chapter on the results of Berenice’s research into the relationship between the Dingo and the Aborigines at the time of white settlement. It also included a selection of poems that had been printed in the Society’s magazine, Merigal.

Her third publication, the Company of Dingoes: Two decades with our native dog native dog was published in 1995.


It contained much of the information from Dingo: Getting a Good Dog a Better Name. However, the section on biology and ecology based largely on research undertaken by Corbett, Whitehouse and Harden was replaced with detailed information based on observations of the Dingoes at the Merigal Dingo Education Centre on Berenice’s property.


Ideas on Dingo preservation are discussed with a less prescriptive and more open-ended approach.


Although it was professionally printed the photos were badly re-produced. It had been printed in black and white, not greyscale. I remember Berenice crying for days with disappointment over the quality of the finished product.


Professor Colin Groves, Professor of Biological Anthropology at the Australian National University in Canberra, reviewed both Dingo: Getting a Good Dog a Better Name and Company of Dingoes: Two decades with our native dog native dog giving both books, and Berenice herself, high praise. 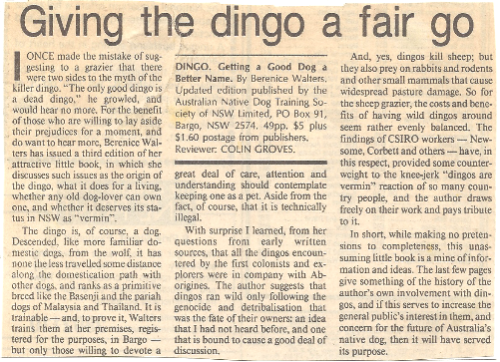 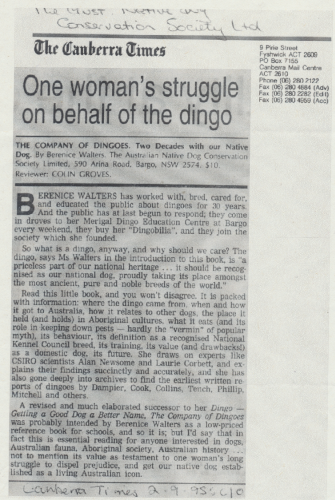 Posted by Random Jottings at 20:08