If you search Hansard for the word ‘Dingo’ you will find in most cases it was a term used to insult a member of the opposite party but there was one senator at least who would have considered this to be an insult to the Dingo itself.

Senator Tony Mulvihill was passionate about Dingoes and Patron of the Australian Native Dog Conservation society.

I don’t think many people realise how early Berenice and the society she founded were out in public promoting the truth about Dingoes.
Although controversy constantly raged about them they took every opportunity to promote their cause by attending festivals, displays , lectures , schools and appearing  television.
One of the highlights of this period was when the group marched through the streets of Sydney on Australia Day led by then Senator Tony Mulvihill with a white Dingo, Peter Pan. As they passed the spectators roars of approval went up and then they burst into singing 'Come on Aussie, Come on, Come On'. At the end of the day they won the coveted award for 'Best Canine Exhibit' at The Rocks Festival Parade; 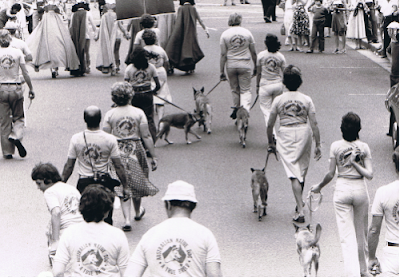 It was a truly historic occasion. This was the first time the group openly revealed that their dogs were actually DINGOES. In addition to the tremendous applause , people ran  onto the road to give the dingoes a pat. 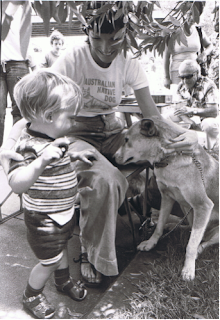 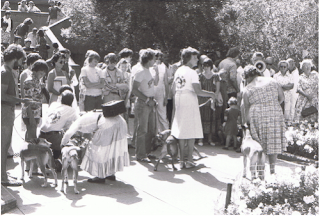 Earlier in the day as they made their way to the assembly point, the Society’s Patron, the Hon. Neville Wran, left his car to come and meet them. Stating "Those are my dogs", he waived to members, chatted to everyone and made the acquaintance of Peter Pan, who was always known as the 'Senator's dog '.
Posted by Random Jottings at 16:21