If you can’t win at least you can laugh

An article about the Dingo appeared in the 1981 Jan-Feb edition of Archery Action. Berenice received two letters in response to the article. It included a number of comments and claims about the dingo and its control including:
In reply to the letters Berenice pointed out the material used in the article was taken from the results of a 10 year program of the CSIRO 1966 to 1976, the National Parks and Wildlife Service, Dingo Research by A J Oliver, and from programs developed by the Society and its founder since 1974.

She also takes quite a brave stand against the writer recommending the use of strychnine by advising him:  “Strychnine is most irresponsible, as it is illegal, and your name and address have been forwarded on to the Health Commission.”

One of the writers had to have the last say. This is part of his letter:

I also had the misfortune to read your article "A brief guide to Characteristics, Behaviour and Trainability" which leads me to believe you sleep with dingoes!          Due to this I am forced to have serious doubts as to your sanity. I quote "sleeping with a dingo is very warm and comfortable….devotion is shown in many ways…like laying his head on your knees ……   resting his chin on your shoulder for a few moments …..ideally the breed should live in the house as one of the family, taking part in all activities and outings". 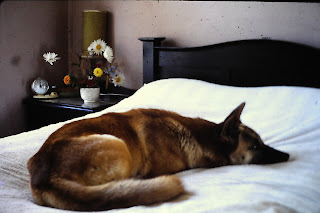 The only word for the above is 'sickening', and it shows the decline of human society. How can you possibly include a dingo (merely an idealised killer) as part of a human family? A dog cannot be compared to a child; your whole concept in this article typifies the situation before the fall of the Roman Empire. I am forced to conclude through this article that you have no idea what a real dingo is, or you are so far removed from the reality of the dingo conflict that it is pointless to continue your Society because there appears to be unrealistic people involved in a conflict that involves a compromise between two cooperating human parties.

Berenice’s response was simply: “You can't win them all, but at least we try - and will keep on trying.”
Posted by Random Jottings at 17:07