The Taming of the Shrew


Our story starts in 1992 at the Merigal Dingo Sanctuary when Snowdrift (Snowy) and Sunny became proud parents of one son and two daughters. Of course, Sunny did all the hard work of giving birth while Snowdrift suffered all the anxiety of an expectant father.

Initially, Snowdrift was not actively involved in the care of his family for the first two or three weeks but as they became more active was eager to care for his offspring and start their early education.

Very soon the pups had grown and it was time to farewell the boy, Humpty Snowman who was to travel by air to his new home in Céligny, on the French Swiss border where dingoes are not persecuted as they are in Australia. Next to move was Mingga, who became best friend of a society member.
This left Wattle who now received the full attention of her parents. Wattle however was constantly in trouble and Snowydrift, although a very loving father, was also a very strict disciplinarian who demanded obedience from his children.


Wattle was rebellious and determined to go her own way. Snowy responded by resorting to ever more severe punishments for his wayward daughter. It was thought he was being too harsh with her and she needed to be removed from his care.

Snowy's sister, Snowqueen (Queenie) and her mate Humpty Two (Twoey), had two daughters about the same age as Wattle. They were a delightful and easy going couple and quite happy to take Wattle as a playmate for Amber and Keira. Wattle was accepted as one of the family, but when the pups were big enough to jump onto the top of the kennel, Amber and Keira would not allow Wattle to join them. It was clearly a meeting place for immediate family members only. Eventually this family group also broke up and Wattle found a new mate - handsome, good natured Harry.
‘Wattie’ was the Dingo that knocked Doctor Harry’s glasses off during the filming of his TV show.
She was originally an outgoing, friendly girl but when her favourite human was unable to visit her any more she became very afraid of strangers and set about excavating a "bolt hole" for herself under the pile of rocks.
There she remained when visitors were around and Harry got all the attention. This made her extremely jealous so, at the first opportunity she would dash out, take a savage bite out of Harry and retreat under her rocks. Harry did not have her speed and agility and was too big to squeeze into her hide out. It became clear that this bad tempered shrew was dominating Harry.

They were moved to another run with nowhere to hide. Wattle objected and while everyone was asleep she tunnelled under the fence to freedom, where she ran around and stirred up the occupants of all the other runs. Berenice found her sitting in front of her old run. The tunnel was blocked up so she called on skills she learnt from her mother – how to open gates.

Her mother had exceptional dexterity in the use of her front paws. Bolts secured by slide catches were easy work, as were padlocks if not securely locked. Once when the key was left in the padlock she managed to turn the key and remove the padlock.

Wattle was not quite as skilled as Sunny but could slide open bolts and knock out unlocked padlocks. After removing the detested object she would take the time to bury it in some distant area of her run before opening the gate to freedom.


Wattle is determined to get what she wants, so she got to go back to her home with her pile of rocks. While showing off the angelic side of her nature to all the helpers she depends on to take her for walks she made Harry suffer for her jealousy of his popularity.

The attacks on him became more frequent and savage until he began to look like a moth eaten Teddy Bear. It was necessary to do some partner swapping.

Yindi was on her own following the passing of her father so Harry was moved in with her. Yindi had always lived with her family and had always been at the bottom in the "pecking order". She was fascinated by her new mate who was very handsome, in spite of his somewhat tattered appearance.

Harry, however, was not pleased with his new accommodation or his new companion butafter receiving a deep wound in his leg while trying to demolish the fence to make his escape he abandoned the idea and discovered he was now TOP DOG. Years of coping with Wattle's aggression had made him wary, but now, dizzy with euphoria, he took full advantage of his superiority by stealing all the food from his new mate.

For the first time in his life Harry had become a greedy pig. It was necessary to supervise mealtimes, give lessons in table manners, emphasise the importance of sharing and remind Harry of the eighth commandment - Thou Shalt Not Steal. Yindi had lots of friends who gave her extra food and she was happy with her new mate in spite of his bad manners. Harry soon grew his thick lustrous coat back. He was been slow to accept another mate but who can blame him for thinking that every bitch is a bitchy one.

Back to Wattle. She still had her pile of rocks but no mate. It was decided to try her with Paterson (son of Banjo) who had returned from Taronga Zoo after 18 months there. He had become very stressed because of repeated attacks by the three tropical dingoes and was glad to return to his birthplace. How would he handle another nasty little bitch?


Wattle and he were set free at opposite ends of a large paddock. She made straight for him in a furious rage, intending no doubt to tear a strip off him. Much to her amazement, Paterson stood until she reached him with fangs bared, he knocked her to the ground and stood on her until she submitted to his superior strength. For the first time in her life she was the underdog.
Further skirmishes occurred when he moved into her run but Paterson was used to fighting three opponents at the same time so one cranky little dingo presented no major problem.


Eventually she gave in.

Her new mate was a very pleasant companion who, although he was not prepared to put up with her tantrums was happy to live in peace with her as long as she behaved herself.

Two weeks later they were observed kissing each other on top of the rocks.

Congratulations Paterson for your success in the Taming of the Shrew. 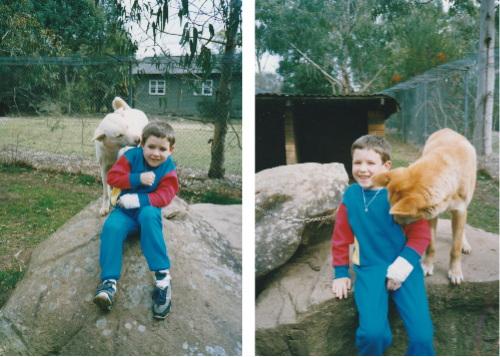 Posted by Random Jottings at 16:18