Napoleon (the Dingo) wins at Waterloo 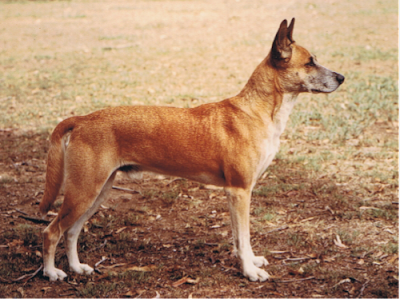 
There were hardly any signs of battle and certainly none of death when Napoleon turned up in Waterloo yesterday.
The noise and smoke (from cigarettes) were there, but Waterloo was the Hero of Waterloo Hotel, Millers Point.
Napoleon - a pure blood dingo - was a guest at the hotel for the launching of two new books by the ABC.
He was brought to Sydney with another dingo, Snowgoose, by Mrs Berenice Walters, of Bargo, to promote The Big Country, a beautifully illustrated book based on the ABC TV's documentary series.
One chapter tells of Mrs Walters's love for dingoes and her efforts to overcome prejudice against them.
Among other chapters are The Taipan Man, about Edward Ramsamy, a showman and authority on deadly snakes; A Brush With Royalty, which looks at the Brushmen of the Bush - five Broken Hill artists; and She Only Wanted to Fly, a story about Nancy Bird Walton.
Berenice recalled:
Preceding the official launching of the books an invitation was extended to Napoleon and Snowgoose to be interviewed on Channel 10’s Steve Raymond Show. An official car picked up our two stars, and handlers, and conveyed them to Channel 10.

The Dingoes having received their pampering before leaving, home, the handlers were treated to a ‘brush up' and make-up repair job. In the make-up room a gentleman’s loud voice was heard complaining that the b…….y Dingoes got a better brush up than he did – Bernard King. He was promptly informed by the Secretary that they did have more hair. Bernard King is a very nice guy and can always be relied on to come up with something funny to put people at ease.
The interviews went off really well, and sections have been used to advertise the show.
At 11 am our transport arrived and we wore whisked back to Sydney to the launching where Napoleon and Snowgoose were once again 'official guests’.
Posted by Random Jottings at 14:40