We’ve come a long way on behalf of the Dingo. 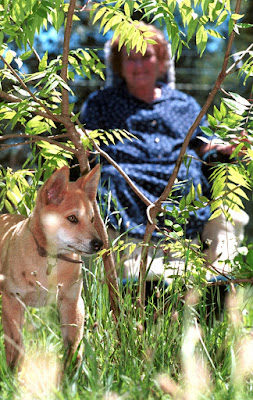 I know it is a frustrating role trying to gain acceptance and understanding for the Dingo. We still have a very long way to go to have the Dingo recognised as a native of Australia, acknowledged for its important role as the apex predator in maintaining nature’s balance and its character understood and appreciated by everyone.

The dingo’s image is still far from what we want it to be.

However, the more I read from the past as part of my research for Berenice Walters’ biography the more I appreciate just how far dingo advocates have come.

Here are some examples of what was written about the Dingo in the past.


In the 1950s the following article titled “The Dog That Can't Be Trained - The Australian Dingo” appeared in Airways magazine.

"One may be able to tame a lion or even a panther, but, after three years of patient trying, a group of Dutch animal lovers have still failed to domesticate Australia's wild dog - the dingo.

"This wild dog, ancestor of all dogs, just refuses to be tamed,” says one of these experts living in Zeeland, "because of its strange character and physical power.

"This is certainly not a dog to be kept by a private person, for it has too much personality to become subject to a master. In fact, it wants to live with human beings on the same level, but never on a master-animal relationship. "

This verdict is supported by the Director of the Rotterdam Zoo who started a training experiment about six years ago with a pair of dingoes given to him by a colleague from the Jersey Zoo in the Channel Islands.

Having little success in the early stages, it was thought that the dogs could be an unusual pair, and so two more pairs were imported from Australia. Export restrictions would normally have prevented this, but as the animals were required purely for scientific experiment, the Australian authorities waived the restriction. Unfortunately, the experiment ended in failure.

One dog breeder said, "This dog could only be kept in a cage of concrete. It has dug up our oil pipe buried three feet deep in the garden. It gnawed a huge hole in the wall because it heard water running in a nearby stream. It climbed a fence more than six feet high and regularly stole food from my neighbour's kitchen. Nevertheless, it was very gentle with me for a time. Finally it became clear, however, that this animal would never succumb to being a house dog. "

Another dog trainer told of his disillusionment: ''At first we thought we had a treasure because both our dingoes, which we named Dinkie and Tukumi, seemed to have fallen in love with my four children. It soon turned out that the dogs were strong-willed animals that refused to take orders. I have had experience with handling some very fierce dogs, but eventually I had to turn my two dingoes over to the Antwerp Zoo - still far from house-trained. "

A report recently issued contains many interesting facts about the dingo, all of which confirm the view long held in Australia that this animal is quite impossible to deal with."

In 1788 the general consensus was that the Dingo was unlikely to become familiar (common place). Surgeon John White says of the Dingo, 'It is capable of barking, although not so readily as the European dogs; it is very ill-natured and vicious, and snarls, howls, and moans, like dogs in common.'

Lt William Bradley says, ... 'It has much of the manners of the dog, but is of a very savage nature, and not likely to change in that particular. It laps like other dogs, but neither barks nor growls if vexed and seized, instead of which it erects the hairs of the whole body like bristles, and seems furious ... From its fierceness and agility it has greatly the advantage of other animals much superior in size, ...with utmost ease it is able to leap over the back of an ass, and was very near worrying one to death, having fastened on it, so that the creature was not able to disengage himself without assistance: it has been also known to run down both deer and sheep ... it is scarcely to be expected that this elegant animal will ever become familiar. "

Governor Hunter said 'We know that the native dogs of this country hunt and kill kangaroo; they may be more fierce but they do not appear to be so strong as our large greyhound ... Of those dogs we have had many which were taken when young, but never could cure them of their natural ferocity; although well fed, they would at all times, but particularly after dark, fly at young pigs, chickens, or any small animal which they might be able to conquer, and immediately kill and generally eat them. I had one which was a puppy when caught, but, notwithstanding I took such pains to correct and cure it of its savageness, I found it took every opportunity which it met with, to snap off the head of a fowl, or worry a pig, and would do it in defiance of correction. They are very good natured animal when domesticated, but I believe it to be impossible to cure that savageness, which all I have seen seem to possess.'

The Dingo displayed at the Australian Museum until about 1980 certainly did nothing to dispel the negative image of our dingo. With piercing eyes, lips shrunken into a perennial snarl, a bullet hole in its forehead plugged with rabbit fur, it was a real turn-off. 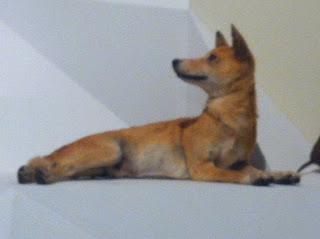 Posted by Random Jottings at 23:15