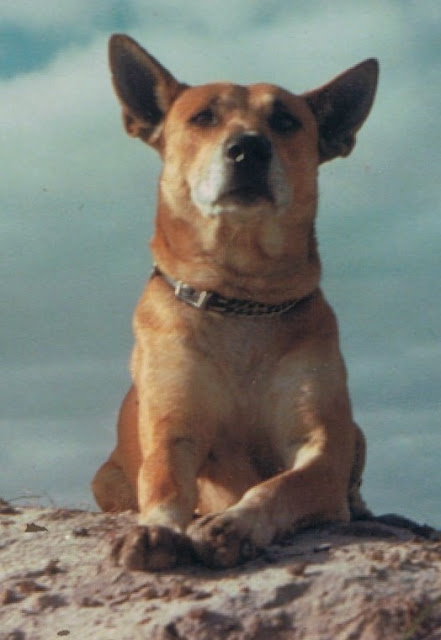 A Queensland Insurance Company was confronted by a big problem back in the late1960s.  A brand new Holden Monaro car was being assessed for an insurance claim. The car was a mess. Not only was the upholstery torn to pieces, the steering wheel was also destroyed. "It looks like a wild animal has got at it" commented an amazed agent.

Actually, a Dingo named Cornelius was responsible.  He had become stressed at being left in the car while his owner dined. He did what came naturally. He chewed and dug at the car interior in an effort to be with his human.

*****
Fred Wirrer was a hardworking and imposing Austrian but there were none gentler in their love for wildlife. In 1969 he was hauling bauxite ore for a mining company at Weipa on the Cape York Peninsula in Far North Queensland when he came across a mother Dingo with her four pups on the side of the road.  He hit the brakes bringing his 75-ton truck to a sudden halt.

The small family ran for cover but one pup got confused and ran in the opposite direction. Then another pup emerged. Fred bent down to pick them up just as the mother walked out from behind cover. She was limping badly as she walked towards the man with her pups. He squatted in front of her trying to explain he was going to take her two sons but he would take good care of them and if they wanted to return to her they could.

As Fred drove off he watched her in the rear view mirror fleeing into the bush with her remaining pups. She no longer limped.

He named the pups Cornelius and Rasputin and they became familiar sights around the area.  When they grew older and more confident they would set off to explore. They always came back until one day Cornelius returned on his own.  Perhaps he had made his decision to stay with the man he had formed such a strong bond with. 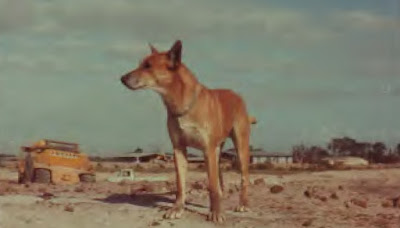 While working at Weipa Fred lived in one of the single accommodation units. After Fred left for work, Cornelius, at an inquisitive age, proceeded to 'explore' Fred's room. On Fred's return each night, there would be screams of "Oh, no. What have you done!!?" The dog's daytime activities was to chew everything within reach. After six months, everything Fred owned had Cornelius' identity mark on it!!

While Cornelius and Fred were getting to know each other, Berenice Walters also kept a Dingo, Dora, surrounded by a pall of secrecy. Branded as "vermin" by the farming community, its keeping was illegal, its destruction mandatory.

It was through author and filmmaker Lionel Hudson that these two Dingoes eventually met in 1975. One thing Berenice recalled on the two first meeting was Cornelius jumping clear over a two metre fence from a standing start.

It was obviously love at first sight for the two beautiful animals resulting in a litter of puppies named Napoleon, Montgomery, Rommel and Josephine.

It was Fred and Cornelius that inspired Berenice to step up her fight to exonerate the noble outcast and form the Australian Native Dog Training Society of New South Wales Limited - a non-profit public company with the sole aim of advancing the dingo cause.

The story of Dora and Cornelius’ meeting is told in the book “For the Love of a Dingo” but this is Cornelius and Fred’s story.

When the pups were old enough Rommel went to Lionel Hudson while Fred and Cornelius proudly took Montgomery home at six weeks old age, and the close relationship that developed between father and son broadened the knowledge of the parental roles of the Dingo. These observations were later backed up by Napoleon and Snowdrift at Merigal.

Fred took his two Dingoes to work with him and was amazed to see Cornelius quietly training his infant son Montgomery in bushcraft, tracking, hunting, defence. 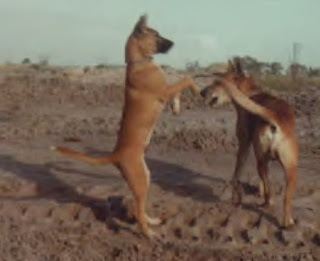 Fascinated, Fred watched as Corny took his son to increasing distances from his car, then stand back to watch the pup back-track, not assisting him, but nearby to support him if the need arose.  But tragedy struck before the young Dingo reached maturity.  He contracted kennel cough, and following a long period of sickness and still in a weakened condition, was hit by a car and killed.  Fred and Corny were heartbroken, but life went on together for another 9 years.  They were inseparable.

There are many stories about Cornelius and one of my favourites is the one about marijuana.

Fred was visiting a policeman friend who had a German Shepherd. He also kept a marijuana plant in his garden as a novelty. Both dogs played happily until the ever curious Cornelius, after sniffing the plant began chewing the marijuana leaves.

On another occasion Fred and Corny were visiting a friend. The man was very excited because his son, who never bothered with gardening in his whole life, was growing little plants and caring for them.  "That's nice" said Fred.  "What plants are they?" Then Cornelius trotted around the corner licking his chops and Fred knew instantly what the plants were.  They raced around the house but all the little plants were gone.  Corny had eaten them.

For the rest of his life, if there was marijuana about, the Dingo would find it and chomp away “Ah, well," Fred would say, "there is no law against dogs EATING marijuana, and Cornelius suffered no side effects.

Fred found work operating a grader around Sydney. Sadly, Cornelius had to be was kennelled at night but he always accompanied Fred to work, sitting beside his man on a grader.  When he got, bored Fred would say "All right, Corny, off you go mate but look after yourself”.   Corny would wander around the area but was always there when the workers packed up.

One day while working at Windsor in far western Sydney, Cornelius did not return. Three days later he turned up at the kennels and let himself in.  His paws were raw and bleeding.

Another time as Fred drove his grader, he could see Cornelius returning early, but there was something wrong.  He seemed to be staggering.  Fred took off in the grader across paddocks and road and just in time to see Corny hide under a bush.  "I'll be right back," he told his stricken dog as he drove back to get his car and rush Corny to a local vet.  He'd been shot, despite the fact he was wearing a collar, registration and name tags.

Fred's boss had other ideas.   "Never mind your dog, you have got a job to do!" "Stick your job, my dog comes first" Fred replied.  Cornelius had been shot with a .22 and the bullet stayed there as it was too risky to remove.

While was waiting for the vet to heal his best mate, Fred went looking for the shooter.  He found an abattoir near where he believed Cornelius had been shot. In the rest room were six nervous men with a rifle. Fred saw red. The men all lied through their teeth. Fred restrained himself. If he took revenge it could call attention to him keeping a Dingo.

Corny recovered and was soon back on the grader with Fred.  He still enjoyed runs but stayed closer to where Fred was working.  Next job was a project at North Head, blasting rock.  Before each charge was set off, a siren would sound twice.  At the first hoot Cornelius was already racing back to the grader, by the second he was sitting close to Fred, shaking uncontrollably, waiting for the explosion, no doubt expecting it would bring a bullet slamming into his neck. 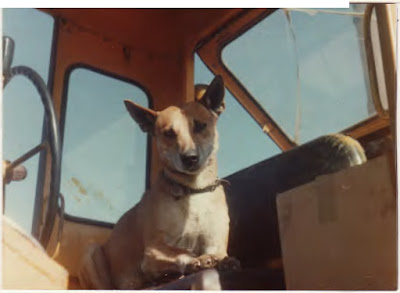 When working near the Fairfield golf course, Fred and Corny were lying in the grass soaking up the midday sun.  As Fred turned his head a snake darted for his face.  Fred stared helplessly as Corny lunged and caught the snake only a few centimetres from Fred's eyes.  He flicked his head and the snake was dead. They celebrated with steaks.  Medium rare for Fred, very rare for Cornelius.

Another time when Fred was working on a bulldozer near a rubbish tip he saw Corny approaching in the distance. Fred worried when he noticed Corny was walking strangely. As he got closer he noticed Corny was carrying something in his mouth.  It was a tiny kitten that he laid it gently at Fred's feet.  Tinkerbell, as she was called, joined Fred and Corny in their home. The dingo lavished his affection on the kitten who often went to sleep between his paws.

Fred and Cornelius did many pub crawls together; the dingo had an uncanny gift for nosing out the right atmosphere.  If the pub was cosy with light-hearted people and good sorts, they would stay! By now more and more people who hated dingoes sight unseen started coming face to face with a real dingo, and were impressed.  Cornelius was nothing like they had been led to believe:  So where was the sulking coward with the shifty eyes?  This bloke stood nobly, quietly unafraid. Suddenly people at the bar were remembering GOOD stories.

After Cornelius' death Fred and his wife visited Berenice.  Dora was always very shy of strangers, but she approached Fred, lowered her head, and looked lovingly up at him with just the suggestion of a tail wag.  It was obvious that seeing Fred brought memories back to her of her one and only true mate, Cornelius, her own Prince Charming.

Cornelius is now but a beautiful memory, but it is on such memories that wonderful dreams are made.
Posted by Random Jottings at 15:09