Last year I submitted the story of my personal involvement with Berenice and her Dingoes in a short story for the Seniors Card. I was amazed when I was recently told this story made the top 100 and will be published in a book along with the other stories. I hope you enjoy it.

I met Berenice Walters, founder of the Dingo Sanctuary, Bargo and known as the Dingo Lady about 1988 when I was Tourism Manager for Macarthur. Her passion for Dingoes was infectious and I became an enthusiastic supporter; Dingo handler, sponsor and Board member.

I spent a lot of my spare time at the sanctuary and with Berenice as my teacher and mentor became confident talking about Dingoes and introducing my favourites to visitors.


My full time job involved very long hours and a lot of stress. When things got too stressful my favourite things was to visit the sanctuary just before closing.

After saying hello to all the Dingoes, spending extra time with each of my favourites, Berenice and I would enjoy a glass of wine in the sanctuary as the sun set. The Dingoes often broke into song, if they didn’t Berenice was always able to get them started. I am blessed to have been able to experience this on many occasions and always went home revitalised.

My son, Clinton was also a welcome visitor. His favourite Dingoes were Wattle and Oola. One time Dr Harry Cooper visited and Berenice asked if Clinton could come. Clinton not only featured in the episode of Talk to the Animals, along with Wattle, but was included in the opening of each show.

The dingoes were mostly on their best behaviour on the day except for Wattle who knocked Dr Harry’s glasses off in her exuberance and Humpty-Two who chewed the expensive cover of the outdoor microphone when no one was watching.


Clinton and I also participated in the annual DingoFest which included a parade of dingoes. Clinton would parade his precious Oola and I would provide the commentary.

I was honoured to be trusted by Berenice to take a Dingo out for socialisation or promotional activities. When we organised a fair at the Liverpool Visitor Information Centre the sanctuary’s volunteers brought along several dingoes and we put on a mini Dingo Parade.

One of my roles as tourism manager was co-ordination and promotion of the AussieHost customer service training program. The sanctuary had a littler of pups due and I spoke to Berenice about my idea of sponsoring a pup as the mascot for AussieHost to attend certificate presentations and other events.

My reasoning was twofold; using a Dingo would draw attention to the program as well as to the sanctuary and its work.

We had been successful in taking Dingoes to a variety of tourism events including the annual Tourism Expo at Darling Harbour. Their presence always drew attention to our displays.

The Dingo I sponsored was named ‘Hostie’. My beautiful girl was socialised early; attending her first promotional photo shoot at six weeks old. 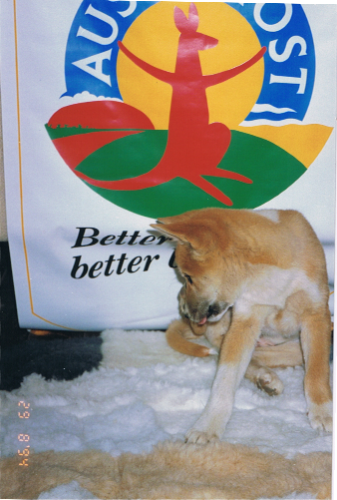 The irony of this event was that it was held in a Camden Council building previously used by the Moss Vale Pastures Protection Board; the organisation that had been responsible for the Dingo ‘control’ activities in the district.

From the age of 8 weeks she attended AussieHost certificate presentations and tourism promotional events. She was a hit with everyone she met and very relaxed under any situation although car travel wasn’t her favourite thing.

One of the certificate presentations was to be held at the Campbelltown Catholic Club. I rang the club prior to the function and asked if I could bring a Dingo. A moment of silence came from the other end of the line, then a little giggle and “I thought you said a Dingo”.

“Oh! I don’t know I’ll have to check with the manager.” The manager came on the line and I explained that THIS dingo was the mascot for the function, extremely well behaved and socialised.

All went well until the food was served. Everyone was lined up waiting to help themselves from the buffet when Hostie decided she was the most important one there and tried to jump on the food table. I think in the end she got more to eat than anyone else because they wanted to feed her titbits.

Once, she even attended a Nationalisation ceremony for Wollondilly Shire Council and got more attention than the Mayor.

The Dingo Sanctuary rarely bred stock but did breed for other sanctuaries and zoos.

One litter was selected by Western Plains Zoo, Dubbo for the new Dingo enclosure. I had spent a lot of time with these pups and had the pleasure of being at the sanctuary when their handlers came to collect them.

Sometime later, while attending a conference in Dubbo, I contacted the handlers to see if I could visit the now adult Dingoes.

I was made very welcome by the staff and taken behind the enclosures to be let in through a back gate. To my complete delight they remembered me and jumped all over me. It was a moment I will never forget.
As I write about this special time in my life I am working on Berenice’s biography. I had been out of touch with Berenice and her daughter Christine for some years and hadn’t heard about Berenice’s passing following a long illness. Christine was concerned about the future of her mother’s records. I jumped at the opportunity to help out and agreed to sort through all her manuscripts, photos and videos. This is involved digitising everything so that her years of research and work will be available to future generations of researchers and students.

I have published one a book about Berenice and three of her dingoes titled “For the Love of a Dingo”.

My time with the dingoes taught me a lot about Australia’s native dog and I was very lucky to have experienced a very personal relationship with many of them and to have received their love in return.

But, mostly it was a great honour and a privilege to be involved with an inspirational lady who had dedicated her life to educating people about our wonderful Dingo.
Posted by Random Jottings at 22:19