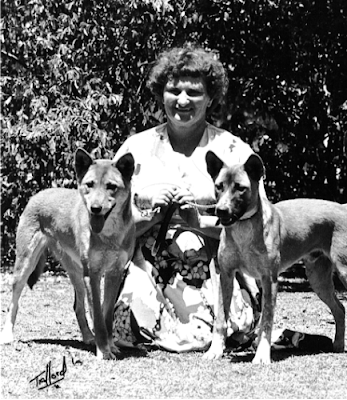 Berenice believed the dingo was a primitive breed of dog not a wild dog. 1 Was she right? Will we ever know for sure? Her article here, written in 1998 makes for interesting reading.

***
Just How Unique is Our Dingo?
By Berenice Walters c. 1998
After fifty years (well, forty-eight to be exact) experience in the breeding, training and exhibiting rural working dogs as co-owner of Wooleston Kennels, I consider myself well experienced in matters relating to rearing, breeding, handling and training of dogs generally. However, as with my introduction to obedience training in the late 60's, and later to Dingoes, whole new dimensions were revealed; i.e. I still had a lot to learn.
Over the 18th and 19th centuries in particular, knowledge of dogs centred on rural working dogs and dogs used for hunting and sport.  The Dingo certainly differed from these.  But is it truly unique.
Let's look at the following:
Interesting stuff, you say!   Dingoes sure are way out.  But wait for it, the above is an excerpt from articles on sighthounds Anaesthesia in Sighthounds by Michell Kornet. D.V.M. and Sighthound Breeding and Whelping by Karen Lee.
Our first Dingo to be anaesthetised was one morning in 1976.  At 10pm he was still flaked out in front of the fire.  Concerned, I contacted our vet, Jim Della-Vedova, who suggested I closely monitor him, making the comment that Dingoes appear to be sensitive to anaesthetic as do sighthounds.  Three days later he was fully recovered.
I was intrigued by Jim's comment on sighthounds and thereby digested all the information I could on these very ancient breeds of dogs - the Pharaoh, Ibezen, Greyhounds, Whippets, Saluki, Afghan to name a few with whom I have had contact.  Despite thousands of years of domestication these sighthounds remain unique in so many ways, so similar to Dingoes. I wonder how the wolf compares.  I would expect it to have similar problems.
I was recently informed that some Dingoes in captivity were already coming in season outside the normal breeding season, the time of declining light.  Well, in the 24 years I have been with Dingoes, with documentation covering hundreds of individuals, only one, a hybrid, had an out of season heat, in November, and that was a very short and a one off occasion.  I just wonder how many of these so-called Dingoes are really Dingoes!  From my experience they are probably hybrids as some zoo bred animals have proven to be.  This is very sad for the breed.  Unfortunately, we also have case histories of genetic diseases such as hip dysplasia (we have been x-raying for this deformity since 1978), monorchids, over and undershot jaws, valgus deformity of the pastern, the latter two found in wild bred stock.  In the wild, dingoes with such deformities would be unlikely to breed, even survive, nature being such a stringent culler, but in the hands of ignorant or unscrupulous breeders and a very limited gene pool, our magnificent native dog could become a derelict of its former self.
Being a woman in a man's world of dogs, I have been rubbished by the best but have managed to carry on regardless fuelled by my obsession with Dingoes.  I have never seen a Dingo in the wild.  However, the behaviour attributed to the Dingo in the wild is frequently enacted in captivity.  For instance, when I let the Dingoes out of a morning, they rush to carefully check out their territory boundary; to very slowly and methodically check the fence line for any intruders.
If I've returned home with a house Dingo, particularly a male, he will excitedly rush to get back into the yard to first check the fence line, particularly gateways, then every item in the house.  The scenting ability of our native dog never ceases to amaze me.  There have been many instances of dogs bred at Merigal picking out mail after it has been several days in the post and coming in contact with thousands of other articles. 2
By contrast, Cattle dogs released into their day runs exuberantly run up and down fences, barking and generally having a ball and with no thought of survival tactics such as searching for evidence of intruders.
Yes, Dingoes are very different from rural working dogs, but they certainly fall into line with sighthounds in many respects.  Years ago, some believed that if the Dingo was ever accepted as a registrable breed of dog it should be within the Working Dog Group!  We vehemently disagreed and were very pleased, and relieved when the National Kennel Club followed our lead classifying the Dingo as a Hound breed.
Edited by Pamela King © 2015

Posted by Random Jottings at 12:02