The Truth about Dingoes 9: Pack Structures 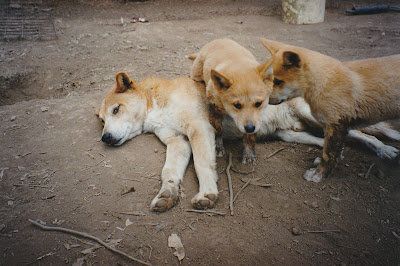 Where conditions are favourable, they form stable packs that maintain distinct territories that overlap little with neighbouring packs.

However, regional variations are seen, reflecting the flexible nature of dingo social structure. This flexibility is not surprising in view of the wide variety of habitats, prey species, climatic conditions and the levels of human exploitation encountered across this country.

Specialisation on larger prey such as kangaroos and wallabies favours increasing sociality and the formation of larger groups. 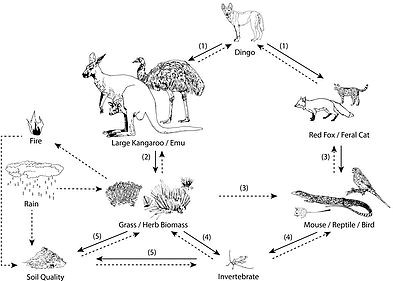 The primary function of dingo packs is to defend hunting areas and other essential resources.

As an example, in the north-west of Western Australia, where kangaroos are the main prey and natural water is widely distributed the dingoes are organised into stable packs occupying discrete territories that overlap little with neighbouring packs. Packs comprise of a dominant male and female (alpha) and their offspring of various ages. Territory boundaries are stable and between pack encounters are rare.
Packs vary in size and range anything from 3-12 individuals, with the smaller packs tending to occupying the poorer areas and larger ranges.

Pack members cooperate to hunt prey and take part in communal activities such as feeding, resting and raising pups.

Lone dingoes are sometimes seen; they have no pack affiliation, occupy larger ranges that overlap the mosaic of pack territories and avoid encounters with packs. They are usually seeking a mate and a vacant area in which to settle.

In a more fluid situation, in the northern tropical Territory stable packs occupy territories, but alter where and what they hunt according to season and prey availability.

In the arid pastoral regions of central Australia most dingoes are seen alone, although they are loosely bonded in small groups sharing a common living area.
A similar pattern also on the Nullabor. Here the dingoes prey mostly on rabbits. Water is sparse and shared by other groups.

Groupings of dingoes are most common during the months leading up to mating, during the raising of pups, and when dingoes are feeding on larger prey like the kangaroo.
These are just examples of a couple of locations to give you an idea on pack structures, taking into account, water and the seasons menu....

Information reproduced with permission from http://jennyleeparker3.wixsite.com/aussie-canis-dingo
Posted by Random Jottings at 13:18