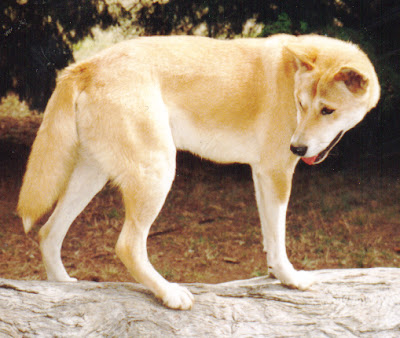 Having lived in the bush Berenice was familiar with mail deliveries being infrequent. Even when Bargo finally got daily mail the excitement of receiving mail at home or in the Society’s PO Box never left her. In 1991 she received a letter in the PO Box from the Society’s Patron, Neville Bonner, enclosing the following poem by Mr. N. A. "Cecil" Fisher.
She eagerly opened the letter then, standing in the street, she started to read the poem, totally unaware of what was going on around her. Sobbing, she rushed back to her car, where she could read the whole poem in solitude. It is a very beautiful and thought-provoking piece of poetry that will bring many tears to many eyes.
DING0

Working in the channel country, in the outback

When in the corner of my eye, I did see,
A dingo bitch lying under a gum-tree.

She looked so worn and ragged and beat,
I left her a big piece of fresh meat,
On the rise, as I rode my chestnut horse up,
I saw the sign left behind by a dingo pup.

I fed this bitch and pups for a couple of weeks,
Alongside the banks of the channel creeks,
The bitch now with the puppies play around,
Left their tracks all over the black soil ground.

One day a dogger to the station, doing his rounds,
Said "For dingoes, I get paid a couple of pounds,
Won't take me long to find the pups and mother dingo,
When my job is finished from this station, I'll go."

Next day, from mustering I rode on back,
To the station on this well used cattle track,
There, lay the dead dingo bitch on the ground,
With dead pups all scattered around.

I heard a whimper that made me look up,
There on the bank stood a little dingo pup,
I reared this pup on milk and tucker of sort,
He looked a champion, I called him (Ding),·"dingo" for short.

Ding was about eight months old, when I went to town,
I headed to town to let myself down.
After the holidays, another job I had to seek,
This time the job was mustering sheep.

Ding didn't take long to understand how to work· sheep,
He was now a working dog earning his keep.
Tirelessly we'd work the sheep all day,
Ding and I never had much time to play.

The boss of the station said "He looks like a Dingo to me,"
I said "No boss, just a mongrel crossed with Kelpie."
We worked on this station until it could be seen,
Ding at working sheep had turned into a champion.

We would muster the sheep from the paddock all day,
At night while the sheep in the yards would stay.
After a feed I would put Ding on the chain,
Seemed to be looking for something he couldn't explain.

On the chain I'd watch him as around he'd prowl,
Then one night we heard a strange dingo howl,
Ding got excited, his body a quiver,
Just watching him, made me give a little shiver.

I walked up to Ding and took off the chain,
I knew that he wanted to join his pack again,
Ding's going took a part of me,
Out in the great channel country.
N. A. “CECIL” FISHER.
Posted by Random Jottings at 16:10