Would Dora Revert to the Wild? 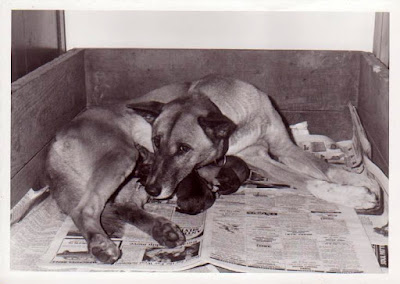 When Berenice got her first dingo, Dora, in 1974 she kept records on the differences between her Cattle Dogs and her Dingo.


More importantly, she took noted what the ‘experts’ told her about dingo behaviour and Dora’s behaviour.


In this abridged extract from For the Love of a Dingo Berenice tells the story of Dora and the birth of her pups and how the ‘experts’ had told Dora would revert to the wild and become a dangerous animal.


We had watched Dora develop from the little wild bundle of yellow-grey at six weeks, to a glorious adult; we had reared and trained her through her puppyhood and teen-age periods; had marvelled at how quickly she matured into an adult at about seven months of age; we had successfully seen her through her period of heat, mating and pregnancy; now she was on the verge of whelping.


The 'experts' were still warning us. Would they be right this time? Would she at last revert to her wild state? Would the pain and fear of whelping turn her into an unmanageable, killer?


Dora had milk for three days, was well developed in the abdomen, but still carrying her pups high, compared to domestic bitches, she barely looked in pup. However, being accustomed to her lean body, she was now showing up well to us, though not to others.


Lionel Hudson had asked if he could film the whelping if it did not worry Dora.


On Tuesday 22nd July Dora's temperature was still normal. There were no outward signs that her time was eminent; no hysterical searching for a place to whelp, no desperate scratching in her box. As with everything else, Dora was cool, calm and collected. No panic, no hysteria, but the expression in her eyes showed she understood there was a change in circumstance. She turned to me for security, clung to me, talking in a soft whine, a beseeching, trusting expression filling her beautiful eyes.


On Wednesday morning Dora and Bluebelle, a Cattle Dog bitch mated the same day, were due. I took the temperatures and pulse of both bitches. Dora's temperature had dropped. She was relaxed and alert, but the drop in temperature indicated she did not have long to go. I put on a heater to warm the room as she appeared cold.


Bluebelle on the other hand was excited, rushing around scratching. Her temperature was slightly lower, and I thought she would whelp first.


At 4.15pm, Dora had her first contraction. At 4.40pm she had four contractions in five minutes. My mother quickly rang Lionel to let him know birth was eminent and to get here as quickly as possible. As a precaution, I put a strong collar on Dora to help control her should she be unpredictable. The warnings of the 'experts' were still at the back of my mind. Her long, sharp, well developed teeth could be capable of inflicting terrible wounds.


The first pup was born at 5.10pm. I could see from the first he was enormous and doubted she could manage unaided. She couldn’t. Carefully pulling in a stroking motion, I helped her and eventually he came away.


At 5.25pm a second male was born, without help this time. She was exhausted after this and we wondered if she could possibly have any more as these two were such big pups, and she herself had never 'shown' very much.


Poor Lionel had not yet arrived. The birth had been so quick, and we hoped she would have just one more that could be recorded on film. In exhaustion, Dora quietly laid her head on my hand, steadfastly looking deep into my eyes. A tear rolled down her face.


Here was the 'terrible' Dingo lying quietly, gently mothering her pups, the only witnesses my mother, my son and myself.


At 5.50pm a car burned into the yard. Lionel had arrived looking like the proverbial expectant father. He even forgot his glasses. He must have been disappointed at missing the birth of the first pups, but he was so excited and happy to see mother and sons looking so wonderful. He was so flat out getting his equipment ready in case there should be another pup on the way he hardly had time to think. Dora paid him no attention at all.


Dora continually licked her two sons which were marked similarly. She was very sleepy and rested her head on my hand. She was calm and trusting and did not object to my handling her pups.


Tears came to my eyes as I quietly stroked her golden body. I asked myself "Where is the savage and possessive monster I had been warned about". She was just like any bitch in whelp, only calmer. Her eyes were full of trust, but only in me.


Lionel had his camera working furiously and successfully filmed the next birth.


The fourth pup was a little girl we called Josephine. She was a little smaller than the others but very active. All the pups were perfect with very short fine coats, very fat and healthy.


The whole time during whelping Dora had not changed her position. As the pups were born she cleaned them up, and snuggled them into her body, and as each successive pup was born, those already born were not disturbed. At no time did she stand or endanger her pups.


Lionel had his movie camera trained on the births and none of the activity appeared to upset Dora if only I touched her pups. My son sat beside the box keeping records as events progressed.


Lionel was balanced on the bed filming, bouncing from one position to another like an acrobat in training. "Move back, you're making a shadow", he pleaded. Then he found it was his own shadow. At a crucial moment he ran out of film. He reloaded quickly and continued to precariously balance on the bed or the heater, trying to find foot room on the crowded floor for close-ups, vaulting back onto the bed for other angles - all with a 16mm camera clutched in his hands.


At 8.10 we emerged from the maternity ward, exhausted but happy. Where were all the 'experts’ theories?


“Dingoes do not mate the same as domestic dogs.”


“Dingoes revert to the wild state during heat periods and whelping.”


If I had not later heard of others who had had similar experiences, I would perhaps have considered Dora was an exception.


What really impressed me with Dora was her complete calmness and absolute trust in me. She must have been in a great deal of pain at the first difficult birth when I had to assist her. Although she did cry, she at no time attempted to bite or stand. She was only really a pup herself, barely 12 months of age. At all times Dora had the calmness and dignity that one expects to find in the old and experienced.


While we were all so busy with Dora whelping, how was Bluebelle faring? As usual, she was still hysterically scratching in her box, dashing in and out. Twenty-five hours later and she still had not whelped.  Checking her at 1pm, I found she had had four pups. By 6pm, she had seven.  She was tired but still very excited.
Posted by Random Jottings at 10:48