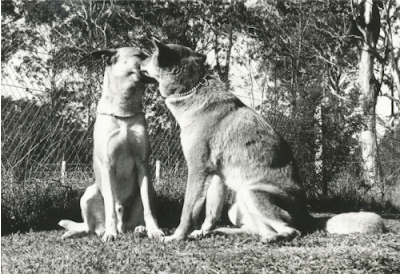 As we head towards the breeding season here are some of Berenice’s experiences at the Merigal Dingo Sanctuary.


Berenice kept records of her observations on dingo behaviour. These records spanning 15 years show how quickly she came to understand the Dingo compared to other so-called ‘experts’.


The last two paragraphs may be of particular interest to those who have an entire male dingo.

Male dogs have been arching their tail over the past month This would appear to be the action that activates the scent gland during the season. No odour has yet been noticed.


Although three junior bitches did start discharging late February, some of the mature bitches have just started to “show”. (Written in April)

The Dingoes had a very late fall of coat so I anticipate the breeding season will be a little later this year. However, members have already reported spates of restlessness and destruction during the past few weeks. Desexed males and females are equally affected.


Many reasons have been given why only the dominant male and female generally breed in the wild. It has been suggested for some reason the less dominant do not come into season.

The dominant female cherishes her male all year, showing complete adoration through submissiveness, mouthing and attentiveness, and frivolous displays of attraction, leading him on with sex play; mounting him to excite him and dominate her. At all times she keeps his attention on her. Should he show interest in another bitch, she will flirtingly place herself between her male and the rival. If this doesn’t work she will force the rival into submission, her male showing real delight at being the centre of such rivalry.

The male appears to positively revel in this adoration and seldom has eyes for other than his tantalising mate.

The reaction of two males who were used for service to bitches other than the chosen mate was of interest. On the one count the dog was removed from the pen shared by his mate and mated to a daughter. When he returned he was soundly beaten by his irate and jealous, mate, and tension continued for many days.

Another male was taken from his mate, mated to another bitch and returned. This bitch’s feelings had obviously been terribly hurt by her mate’s infidelity, but when he was put back with her she welcomed him happily and submissively, and within a short time, both were romping together, though she seemed careful to play out the role of the weaker sex, encouraging him to dominate her. These two dogs enjoyed a very happy relationship for four years though they were not allowed to breed. Apparently, her love for her mate was such that on his return all was forgiven.

The breeding season was showing all the signs of starting a few weeks early. The trees were colouring up, and despite the heat of February, all the Dingoes were coming into heavy coats. Meri came in quickly and Napoleon jumped the 61-foot fence with 2-foot lip and three strands of barbed wire, scrambling, or struggling, and mated. For peace's sake we left him there, but assumed, as she was on a contraceptive she did not conceive. Unfortunately, Napoleon seemed to get bored. Perhaps he sensed she was not going to conceive and tried to gate-crash into the main enclosure.

I rang our veterinarian. The bitches were becoming very excited, flirtatious and quarrelsome,  Napoleon restless. The first thing Jim asked was 'Is the drought going to break? Well it did, four days later.

Napoleon was given an injection to quieten his ardour for approximately three to four weeks, and he has become much more manageable, behaving as he does in the non-breeding season.

Strangely we received advice from Elizabeth Pestalozzi that she had had to get her Binuey a 'chemical castration' shot … he would have been unmanageable without it … thank goodness they only have one season a year.’ Elizabeth lives in Switzerland, and I found it most interesting that we were having similar problems at this time, although she lives on the other side of the world.

We had a near crisis with Snowy. Several females came in season May to June, and of course Snowy thinks he is the alpha male, and no other male should be bred. He screamed and bellowed his way up to the end of May, constantly trying to dig his way out of his yard. His dominant roars delayed the elderly Kimba mating to Willie till I moved him right away. Snowy, nevertheless constantly peered through the bush ever ready to break up any romance and I could not tolerate his dominance any longer and put him onto a tranquilliser. Even though the dose was small, he appeared drugged - but still for most of the time continued to be stressed. The vet suggested we had no alternative but to give him a hormone injection. As the injection would take about a week to moderate his behaviour, he was to be kept on a full dose of the tranquilliser for several days.

Snowy has always been a very boisterous, affectionate dog, jumping up into your face with joy, but there was something threatening in the way he jumped at David about a week ago. It made us realise he needed to be treated with added caution while he was under such stress. A day later, I was leading him up from the large exercise area, and he vigorously showed me he wanted to go where the in-season females were. When I checked him, he leapt up at my shoulder, but his bite was so inhibited, I did not even feel his teeth; nevertheless, he got a thump on the top of his head and a short, smart obedience exercise. He was very quiet afterwards, and I knew he was sorry for overstepping the mark.

On Friday, Snowy was still receiving the tranquilliser and looking very doped, particularly in the eyes. Mary was working at the kennels, when we had another altercation with him. As always, she spoke to Snowy, who was lying on the ground. She noticed he wagged his tail and bent down to pat him. He suddenly flew at her, growling, biting her hand, but again a very inhibited bite that barely broke the skin.

I rang the vet again to reassess the drugs Snowy was receiving, as his aggressive behaviour was not normal, even making allowances for his frustrations. He explained that some dogs, especially flighty, highly sensitive ones, can be adversely affected by tranquillisers. It can cause them to go into a state of 'daydreaming' where they may appear aware but are not. So, when Mary approached Snowy, he automatically wagged his tail, but reacted in fright as something suddenly appeared near his head (Mary's hand). He had reacted in defence. The vet enquired if Snowy's third eyelids were inflamed, which they were, and this confirmed his diagnosis that the drug was adversely affecting Snowy's behaviour.

Snowy was taken off the tranquilliser and 36 hours after the first one, looks his normal self but still protests loudly at goings on between other Dingoes. Seven days after receiving the injection, instead of trying to demolish his enclosure when a mating occurs, he goes to the top corner of his yard and sings along with the other dingoes. To me this is an indication that the stress has diminished - but not completely.

Too often, well intentioned persons tell me 'dingoes are just dogs', but they are natural hunters and extremely independent. The greatest care must be taken, especially during the breeding season. The dog that appears well adjusted, well-mannered and under control by the person it respects as its alpha person, would not necessarily respect other people, and could therefore be unpredictable and dangerous deprived of the 'alpha person'. The Dingo's instincts and behaviour are natural. They have not been dulled by domestication.


In my opinion, it is necessary to work with your males, to share your lives with them; in all the little things in life, he must recognise you as dominant to him. This is not accomplished with harshness, but through allowing him to share his life with you. Just the regular putting on of a lead, and taking him for walks, moving him from his yard to another, brushing and handling him generally, all help you to assert your authority through your dedication, without which the risk of a challenge from your companion is high.

Posted by Random Jottings at 12:40