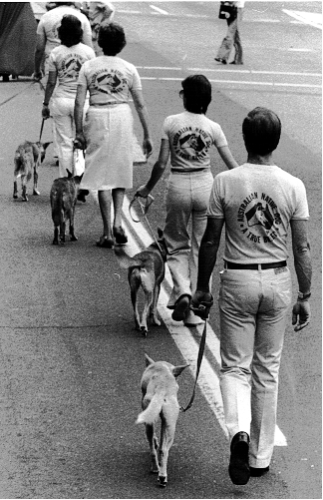 In November 1978 Berenice agreed the society would participate in an Animal Liberation March.

This was the first ever animal rights march in Sydney and the dingoes were given the honour or leading the procession.

Arriving at the assembly point Berenice was impressed, if not a little apprehensive, by the quantity and quality of the police escort.

A large police sergeant bore down on her, taking her arm in a vice like grip. “Are you marching?” Before she had a chance to reply a penny seemed to drop. “We’ve got our wires crossed. We were expecting gay liberationists not animal liberationists!”

Asked if they would like to march along the footpath or down the centre of the road they opted to march behind the waiting police car. “Well that will travel more comfortably down the middle of the road,” said the amiable officer.

They received had red carpet treatment from the police force and the press.

Posted by Random Jottings at 14:59