Sheila was a starving homeless stray in 1992. She had been taken to a vet to be euthanasia because she was a Dingo.  The vet was Jim Della-Vedova who was also the  President of the Merigal Dingo Sanctuary.


She was a very sick girl and severely affected by heartworm but Jim saw in her a beauty and gentleness. He contacted Berenice hoping she could take her in.


Berenice didn’t hesitate. What a sorry sight greeted her. The sad dingo was curled up in a tight ball with Jim's cat. Her only redeeming feature was her beautiful eyes.  She was also pregnant. Although her purity was doubted, she presented such a pathetic sight it was agreed to take her in.  Sheila received all the medical attention she needed.


At first, she was extremely wary and clung desperately to Berenice's side, day and night.


Surprisingly, she had been well trained and had impeccable manners.

Although still very weak, she obediently walked at heel, always waited at gates until told to come through; she sat, shook hands, stayed and dropped, came when called.  She slept on a trampoline near Berenice's bed.  Her manners were perfect.  She never jumped on furniture or Berenice's bed unless invited.  When Berenice had to go into hospital she insisted on sleeping in my her for comfort. 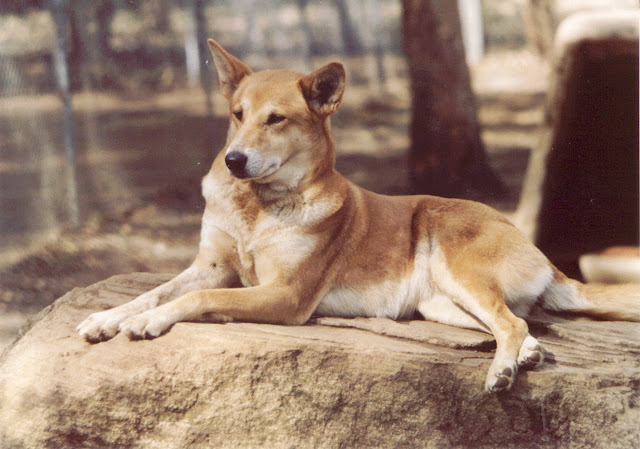 At mealtimes, she lay down with her back to the eaters and never begged for food.


During the night she would regularly check to make sure Berenice was there.  Berenice would hear her claws clicking on the tile floor, then feel breathing close to her face.  If she appeared asleep, Sheila would return to her bed; if she opened her eyes, Sheila slowly wagged her tail in greeting.  After a pat and a few words, she would go back to her bed.


As Sheila slowly recovered her strength, she accompanied Berenice everywhere. She loved to travel in the car, sitting up in the passenger seat as a human, staring disdainfully at the drivers of any vehicles they passed.  She would also raise her paw as they passed looking for all the world like the Queen.  Although she was still insecure away from home, providing she was beside Berenice she adapted well, but panicked if she cannot see her, even for a few moments. 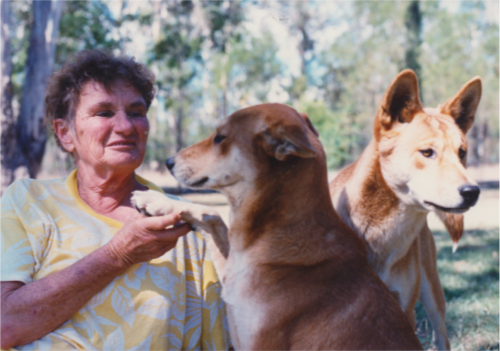 One day she was fossicking in the driveway when he a member opened the gate to bring his car in. Sheila bolted through the open gate and in a flash was disappeared among the trees some 300 metres away.  Rushing to the gateway and standing in the clear, Berenice raised her arms and called "come" in a firm, but playful, manner, then got down on all fours as if to play.  Alerted, Sheila broke into a gallop heading straight back to the open gateway, and Berenice. In fact, she was going so fast she could not stop and shot straight past, then dashed straight back to her and sat.


Sheila proved to be a great ambassador for her breed - even if she is not pure.  When tourist buses arrive they would be asked if they would like to pat one of the dingoes.  Unsure, many would retreat slightly as Sheila came out of her yard. Then, followed by admiring 'ahs' as she sat in front of them and offered her paw. 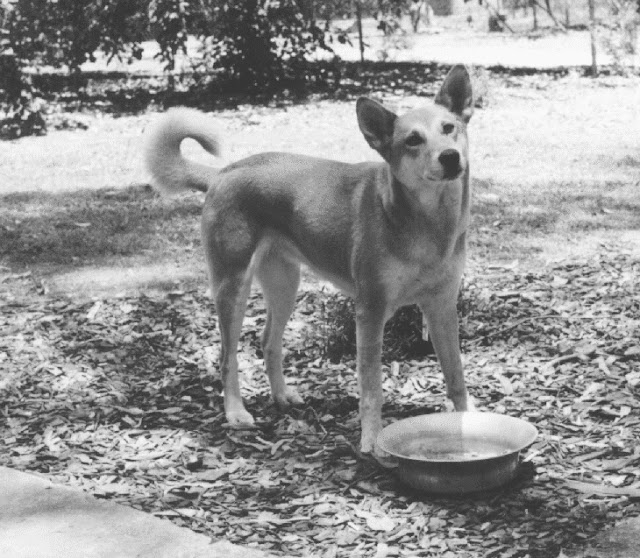 Because Sheila needed constant attention when she first arrived she was never far from the safety of the house and became quite spoilt. Even if put in a run for a couple of hours, she would stare appealingly towards the house. If this didn’t work she would start a raucous barking. Of course, everyone felt guilty.


Sheila demonstrated her strong reasoning powers many times.  A 'doggy' door put in for the house dogs, Kalang, Jarrah and Sheila.  It was set so the dingoes could not get in, but could get out.  Sheila soon learned the trick of patiently bouncing the door till they could get a claw, then their nose in under the flap, and 'hey presto' she was in.  The first-time Sheila managed this she dashed in roaring her pleasure at having overcome yet another obstacle.


Sheila had so much love to give and she obviously came from a loving home where she has received dedicated treatment.  Something dreadful must have occurred - perhaps her owner died, she was stolen or became lost.  Whatever the reason she became almost neurotic in her fear of losing her home again.


Of an evening as soon as Berenice sat in her reclining chair, Sheila would sit in front of her, her beautiful face alert, eyes full of intelligence and love. She would gently lift her paw 'begging' to be invited to jump up on to the chair with Berenice where she would curl up in a ball like a large cat.  On several occasions, Sheila would be sitting alone in the garden when she’d suddenly lift her paw with a happy expression on her face.   We believe she was thinking of one of her loved ones.


When visitors arrived at Merigal, Sheila would race out to the front fence to welcome them with a mixture of barks, and howls then turn to let Berenice know there were visitors. The sound she used on these occasions could only be described as a roar; a vocalisation that is deafening and one which is described by Lord Medway as common in dogs of Asia.  Japanese visitors also describe a similar vocalising from their native breeds.

Sheila had been Berenice’s constant companion for over 11 years when she appeared to be having a small stroke, one eye changed and started to swell. Thanks to the television show, Animal Hospital, Sheila was taken to see an eye specialist.


During the interview, prior to seeing the specialist, Berenice became very emotional about the thought of losing her beloved Sheila. At the time, Berenice was suffering the later stages of motor neurone disease and it was Sheila who gave her quality of life.


The preliminary examination indicated she may have a tumour behind the eye, forcing the third eyelid up. It wasn’t a good prognosis. The television show arranged a special taxi that could take Berenice’s wheelchair so she could accompany Sheila for a biopsy. It was discovered to be an abscess and treated with antibiotics.


She was the most loving of dingoes and all she asked in return was to be loved. As part of the PR team, she became a veteran of television performances, having appeared on several shows including Totally Wild, Good Morning Australia, Derryn Hinch, Midday Show and Talk to the Animals.


She was very well-mannered and greeted visitors with a shake of the paw. When her special friends arrived, she always roared in pleasure and excitement and rushed in to tell Berenice. 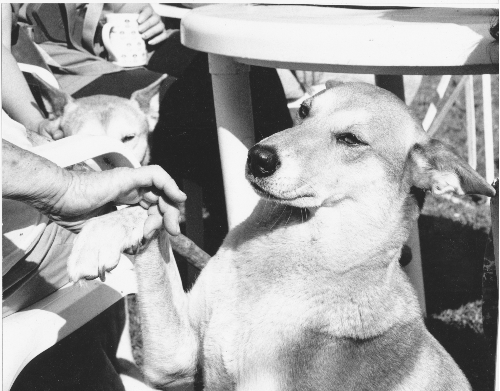 Posted by Random Jottings at 19:01