So, You Want to Own a Dingo by Berenice Walters. Part 2 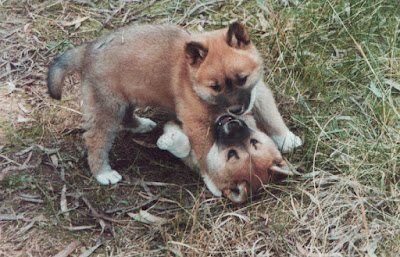 Many people today still think that owning a dingo is the same as owning any breed of domestic dog. This is just not the case and was a matter that concerned Berenice many years ago. This is the second part of an extract from her book “The Company of Dingoes: Two Decades with Our Native Dog” published in 1995 and based on her own experience over 20 years.


Can Dingoes cross-breed with domestic dogs?


Dingoes can cross-breed with domestic dogs, especially when deprived of their own kind. In the wild, the dingo pair has a strong lifetime relationship if not interfered with by man or accident. The close social structure of the small group, or pair, protects the breed from mongrelisation. However, indiscriminate eradication programmes such as aerial baiting, poisoning, trapping, shooting, in wilderness areas, could deprive a dingo of its mate, and lead directly to cross-breeding, particularly in the case of a lone male. The death of a mature dingo could also lead directly to increased numbers through premature breeding by immature dingoes due to lack of parental control.


Domestic breeds of dogs have been bred for highly specialised work - for herding, hunting, heeling, protection, sledge pulling etc. for many centuries. In the dingo, we have a 'Jack of all trades, master of none (except perhaps, survival). Deliberate cross-breeding (or mongrelisation) of this superb natural, purest of pure breeds, cannot be justified, nor should it be tolerated.


When is the Dingo breeding season, and are they different to normal domestic breeds?


The Dingo has a single annual mating season that is restricted to the time of declining light, the Autumn/early Winter months when behaviour can become extreme. General restlessness at the onset of the breeding season usually starts late February, particularly if there is a cool change in the weather; quarrelling and scrapping can become a real problem, and some groups may have to be temporarily broken up. In the wild, the less dominant members of the group can keep away from the dominant members, but in captivity, an unnatural situation and frequently overcrowded and stressful; it is up to humans to protect the welfare of those who cannot protect themselves naturally.


The onset of the breeding season is particularly difficult with the young male dingo. Secure fencing, backed up with the discipline of such from puppyhood, is essential to prevent wandering. Desexed dingoes also react similarly at the approaching 'season' but are usually less assertive.


In the domestic environment, bitches must be protected during the breeding season as with other breeds. At the Merigal Dingo Sanctuary, where we have approximately 10 bitches, and a program of controlled breeding, we used to give the contraceptive Matenon, starting late February and through to July and had no adverse side effects. However, this has been taken off the market and we are currently using medroxyprogesterone acetate with care being taken when using it in older animals. For further information consult your veterinary surgeon.


The in-season bitch can stay attractive over a period of 6 to 8 weeks; the time of initial attraction can extend from the normal 10 to 12 days to 20 days and more. Frequently, the bitch will allow the male to mate with her once early in this period, possibly 10 to 14 days prior to the time of regular matings, as if nature was making sure of her male's attendance during the receptive period. There are also many reports of the Dingo bitch cycling twice within the breeding season, perhaps depending on the availability of a male.


Dingoes are very active during "process of mating”, and usually tie quickly after mounting, the period of the tie recorded at Merigal relatively short, 11-17 minutes. Matings early in the heat period are accompanied by excited calls and moans from the mating bitch, and screams and excited howling from the rest of the group; again, perhaps nature's way of protecting the mating pair at this vulnerable time with this ear-splitting barrage.
To be continued
Posted by Random Jottings at 16:42