The Truth about Dingoes: 6 The protector of our native wildlife 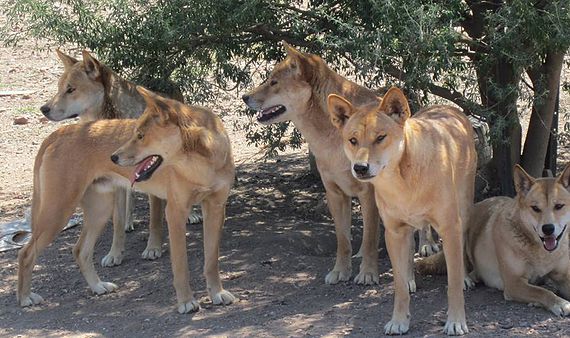 The dingo is guardian of Australia's unique fauna & flora
Research has demonstrated that dingoes have a profound influence on ecosystem structure.

The ecological influence of dingoes is so important in fact, that many native species can only persist where dingoes are present.

Because dingoes are socially complex, they are particularly sensitive to lethal control.

Dingoes are deeply social and intelligent beings. They care for each other, hunt together, maintain territories and traditions, and their ecological influence is tightly linked with their pack structure.

To recover Australia's ecosystems, predator control practices must be eliminated entirely, and dingoes given full protection.

It is the pack that is the apex predator, not the individual dingo.

Many ecologists now recognise that the disruption of dingo populations has been the ultimate driving force of extinction and land degradation in Australia.

The ecosystem does recover when dingo populations are restored.

As Australia's Top Land Predator
As Australia’s "top land predator", dingoes have a mixed reputation. Farmers have long lamented their attacks on livestock, and in the public mind, they are associated with the disappearance of baby Azaria Chamberlain in 1980.

In most states, dingoes are classified as vermin, which means it’s legal to bait, trap and shoot dingoes and crossbred wild dogs.

But some farmers are finding a dingo-friendly approach is gaining better results.

Not too long ago a Queensland cattle farmer (Angus Emmott) recalled the following,

“As a youngster, we used to always bait and we were always putting traps out and trapping dingoes,” “So it was an ongoing war back in the day.”

But these days Angus lets dingoes roam free on his farm.

“At no effort to yourself it provides control of your feral animals and also your large number of roos,” he says.

“So, it’s a win-win. In saying that, dingoes do take a certain no of calves - it’s very low, but I think with all the other benefits that’s a pretty small price to pay.”

Research backs up the idea that attempts to eliminate dingoes are counter-productive.

In some cases where they have killed dingoes there have seen more stock losses - more animals killed than before and more dingoes living in that area rather than less, (but in fractured pack structures!) There are also other negative effects; more kangaroos, more foxes. So overall, it’s been unsuccessful.

Australia's dingo is an extraordinary animal, that is able to more or less do the job of a lion or tiger; just because it looks like dog, it loses any value, when it is the most valuable animal in our ecosystem.

But the wool board feels that dingoes and wild dogs remain the sheep farmer’s worst enemy.

They say "in the long run their numbers have got to be significantly reduced,” and Wool Producers Australia has put together a national wild dog action plan to rid our dingoes that we've got in rural Australia.

It's a fact that we need our dingoes and we must get them off of the vermin listing.

If we can learn to coexist with the dingo without lethal control, we can, and will, all benefit.

The dingo’s future ultimately depends on how we - governments, landholders, scientists, conservationists, the public and the media - choose to see them and how this influences our views on how we should or shouldn't manage them. Ideally a sustainable coexistence that favours non-lethal approaches to conflict resolution. Such as concentrating on guardian livestock animals with no further baiting.

Posted by Random Jottings at 19:21