First Dingo to Join the Army


Berenice received many requests for a dingo but unless people were members of the society with facilities and experience to foster a Merigal dingo there was little chance of them achieving their wish.
One of the calls she received was from Major Terry Boyce Commanding Officer of the 3rd Field Regiment, Royal Australian Engineers seeking a regimental mascot.
It was agreed Napoleon’s son, 13-month-old son Boorooma would be suitable for the first dingo to become the mascot of an Australian Army regiment.Before they let him join the army he was taken rabbiting to familiarise him with gun shots. He then spent a couple of weeks in Sydney to test his adaptability. He took everything in his stride. 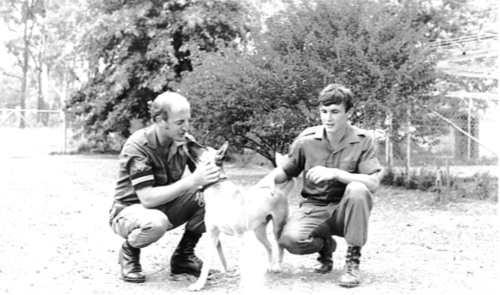 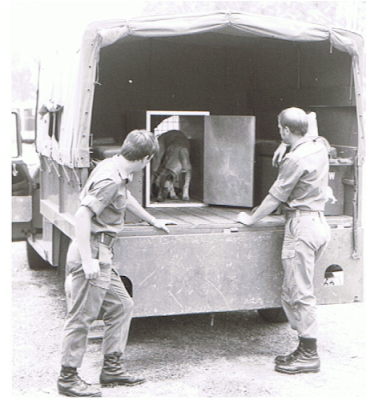 His official name was Wooleston Boorooma, but the 350 men of the 3rd Field Regiment, Royal Australian Engineers, called him Bruiser. His army number was MAO117 and he was given the rank of Sapper. He proudly marched at the head of the regiment when on ceremonial parades.
Problems arose when the Queensland Government would not give permission for Boorooma to be with his regiment n Townsville but finally, with the help of Dr Norman Scott-Young, the local State MP, approval was received.
Boorooma settled easily into army. To avoid problems if he became a one-man dog he had four handlers. He flew in aircraft, rode in armoured vehicles and had rifles fired over his head. The soldiers welcomed him into their home where he was popular with the children.
But dingoes will be dingoes and he got black marks for chewing towels, boots and mattresses as well as running off with the hats of the duty picket.
He became the pride of the 3rd Field Regiment, who felt the full force of prejudice against him when the Canine Control Council refused to allow him to attend a local dog obedience club.
Major Boyce was quoted as saying, “Still the army looks after its own. I am not quite sure why they did that but we will be going to work on the problem whatever it is. 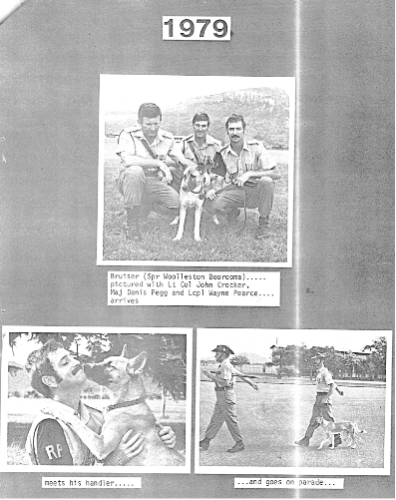 Posted by Random Jottings at 20:04